I can finally say that together we made this happen! We haven’t forgotten about the hardshell cases, but we were able to develop Pump Peelz to help decorate the OmniPod.

Go to www.pumppeelz.com to learn more!

Also, if you want to help support finding a cure for diabetes, visit www.jdrf.org. On a side note, if you go to Moe’s Southwest Grill and “make it a meal” they donate a portion of the sale to the JDRF. Great cause and great food. 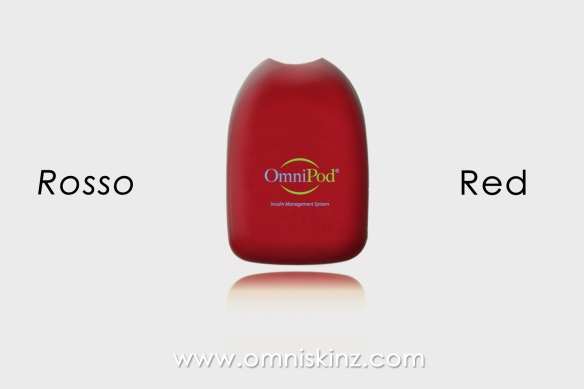 OmniSkinz is a plastic case designed to fit over the OmniPod. I developed OmniSkinz to help type 1 diabetics using the OmniPod express themselves by customizing their pods. A 12 year old boy could have a basketball themed pod for his games, a 16 year old girl could have her pod match her bathing suit at the beach, a 30 year old mom could have a “skin colored” case to help hide her pump. The possibilities are endless.

***OmniPod is a trademark of the Insulet Corp. I will not be manufacturing any skinz with their logo without permission. The “OmniPod” logo on the red pod is just for demonstration purpose only***

I never really considered being a product developer, innovator, or inventor. After all I went to school for music technology! But two years ago when my fiancée, Emily, was diagnosed with type 1 diabetes, everything changed. Our lives became consumed with glucose test strips, lancets, ketone strips, Apidra bottles, and sharps containers (most of which she can hide in a purse the size of my iPhone). I had a lot of learning to do!

For those of you who are unfamiliar with type 1 diabetes, let me fill you in! If you already know all about this stuff scroll down to the OmniSkinz Story in bold.

First off, it’s not the same as your grandma’s diabetes… that is called type 2. This form of diabetes is called type 1 (aka juvenile diabetes). It’s an autoimmune disease and not a lifestyle disease. You can be a young Olympic athlete, a toddler, a teen etc. and still be diagnosed. Essentially, type 1 diabetes is a pain and an inconsiderate jerk.

The other main point that differentiates type 1 diabetes is that it is “insulin dependent.” What this means is that your body attacks the beta cells in your pancreas and renders it relatively useless. The only way to manage this form of diabetes is with insulin therapy via injections or insulin pumps.

A few months after Emily was diagnosed she decided to go with the OmniPod Insulin Management System. It’s a revolutionary little pump that uses no tubing and sort of looks like a white travel sized computer mouse. You can stick it to just about any part of your body and it doses the proper amount of insulin. The little pump really makes it much easier to live a normal life. I highly recommend checking out the product on their website if you are considering getting an insulin pump. 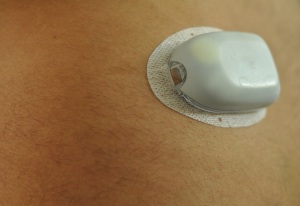 Not too long after Emily went on the OmniPod, I started to think about the possibility of making a case for the pump.  We live in a world of products that are personalized. Cell phones have millions of different cases and colors to choose from… diabetics on the OmniPod have one color – white.

I obviously wasn’t the first person to think that the OmniPod was bland. A quick google image search will show hundreds of teens and kids putting stickers on their pump. I even saw one image of a Christmas Tree decorated with OmniPod ornaments.

And so it began… 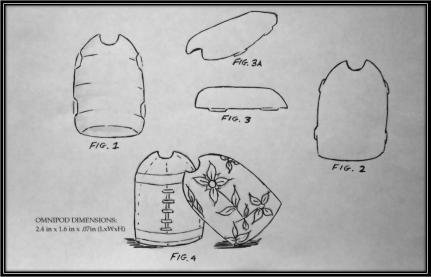 After some brainstorming, I created a rough sketch to show the dimensions and features of the OmniSkinz case (see above). I also tried to design a very rough sample of what I envisioned being designed on the cases. I don’t think anyone is giving me an award for my floral pattern.

Once I had the design I started researching how to get a plastic prototype made. After a few phone calls and emails I found that my school, California University of Pennsylvania, has an industrial tech program along with a plastic prototyping machine. Bingo!

I talked with a professor and was able to propose my idea to one of the classes. One student in particular thought the idea was worth pursuing. The original prototype was created for less than a hundred bucks and a few hours of work.

Alright, so the first prototype really wasn’t the greatest. It was a bit bulky and still had that medical white look to it. On the bright side, it was definitely a start.

Fast forward a few months and I receive a phone call from the same student. “I’ve got it” he said, “let’s try colored plastic vacuum forming instead.” Problem solved. It was cheaper, quicker, and looked way better.

The final OmniSkinz prototypes were born in less than ten minutes.

Fun. Funky. Fresh. That was the look that I was going for when I developed the look of the first advertisement for the brand. The “Pimp Your Pod” slogan was born. I designed this the same week that Steve Jobs passed away. I have always been inspired by Apple and decided to make the pods look like icons on the “dock” of a Mac.

I should also point out that I’m not a designer or a Photoshop expert. I found everything that I needed to know about the Adobe Creative Suite on YouTube or www.lynda.com.

The design above was inspired by the old colored Apple iMac advertising campaigns. I called this one “Jazz it up.” Emily later came up with the “Switch it Up” concept which I used for the final foam board presentation.

The “Rosa Pod” above was inspired by the Fiat company. I test drove a new Fiat 500 in Washington D.C. and loved the marketing material I was given after the drive. The one pamphlet I was given had each of the colors that the car came in… listed in Italian! Rossa, giallo, nero, grigio etc. I loved the idea. It sounded artsy and sophisticated.

And finally, the actual prototypes ready to be sent to Insulet Corp with the “Switch it Up” slogan created by Emily.

Two weeks later I had a really nice phone conversation with the director of marketing. He loved the idea and explained that the company may consider the concept in the future.

I spent about a year working on this project and I loved every minute. It was an awesome learning experience and I have nothing to regret. I learned a ton about licensing, design, manufacturing and marketing through this project and I’d be happy to share some insights with you if you have questions. On a side note, if you have ideas or want to help send me an email at omniskinz@gmail.com

My final thought with the OmniSkinz product is to have OmniPod users take the survey so that I can collect the data to show the Insulet Corp that OmniSkinz is a marketable product.

With your help I can show that a small idea can have a big impact.